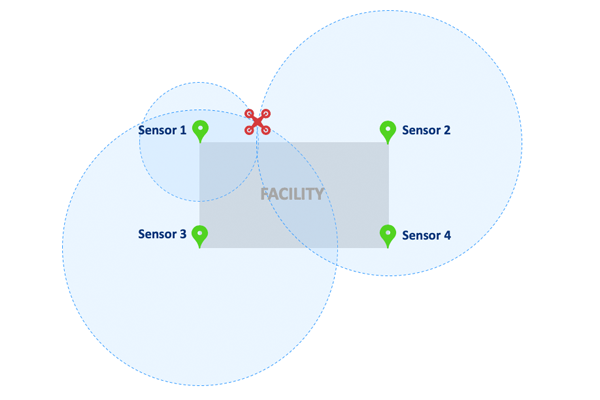 The AirWarden™ system uses spectrum sensing to detect potential drone and controllers in seconds. Once detected, the signal is analyzed and run through several filters to ensure that it is in fact a drone or controller signal, and to calculate its location.

The system tracks drones across a broad range of standard channels used for drone communications including 400/900 MHz and 2.4/5.8 GHz.

The system uses Software-Defined Radio (SDR) to control which frequencies and physical signal characteristics are received and analyzed. This means the frequencies can be changed without the need to replace expensive hardware.

Detects both Known and Unidentified Devices

AirWarden™ stores unique drone physical signal characteristics in a library of known drones that includes the majority of consumer and commercial drones. Drones or controllers not included in the library will be listed as “Unidentified”, but may still be detected and located.

The system uses the differences in received physical signals by each sensor to trilaterate the location of the drone or controller.

AirWarden™ displays the location of each device in the Command Console in real time. Detection events can also be replayed to assist with incident analysis.