Our Founder and CEO, Linda Ziemba, has been working in the technology industry from the very beginning of her career and in 2004 entered the security industry, specifically internet security. Fast forward a bit to 2015 when she saw drones interfere with California firefighters trying to control wildfires and save lives, crash-land in front of Angela Merkel, and end up in the stands of the US Tennis Open. It was then that she had the idea to use internet security techniques against these flying computers to enhance privacy, safety, and security.

In the early days of AeroDefense, the company’s product was a mitigation system. What seemed in the beginning to be an “ethical hack” to protect people from malicious drones and their operators turned out to violate FAA, FCC, and DOJ regulations with penalties of jail time and financial ruin level fines. Ziemba refocused the company’s product to a system that A) has no mitigation capability to affect the flight of a drone (FAA), B) does not interfere with someone else’s radio network (FCC), or C) demodulate or decode a private communication (DOJ). Not only did she want to protect her business, but she also didn’t want to knowingly provide customers an illegal and potentially dangerous solution that could result in negative consequences for them. 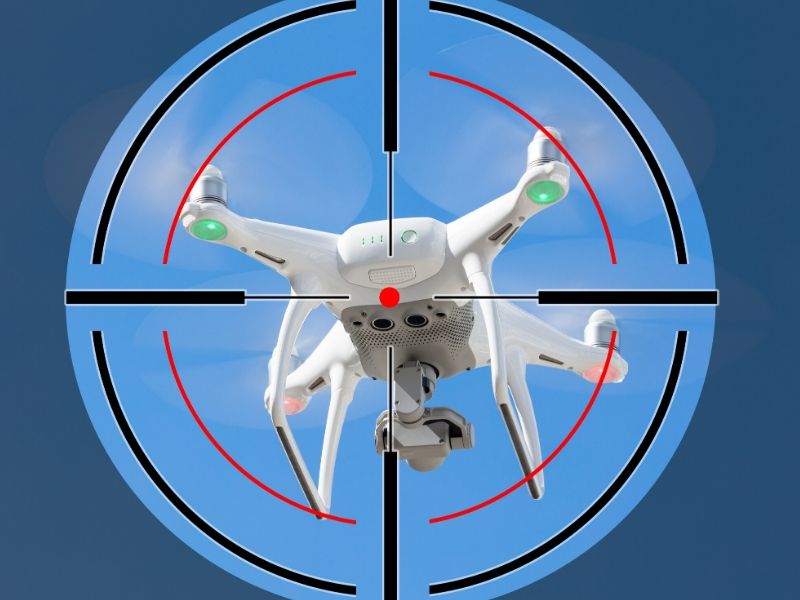 Although it may seem like a great idea to jam a drone signal or shoot it down, there are many concerns besides it being illegal. What happens to the shot that misses? How do you staff for someone with a net gun 24/7? What if a jammer blocks local public safety or nearby businesses’ GPS timestamp on security systems? What if a jammer falls into the wrong hands? We could go on. In all these scenarios, you are liable and responsible for the public safety threat you are potentially creating.

There has been buzz in the news lately about privacy concerns regarding foreign made drones. Drones are minicomputers that collect data. This goes for drone detection systems as well, but some systems collect information they shouldn’t be. For example, some systems on the market today extract GPS coordinates from a drone to provide a more accurate location, but this is illegal. It requires the system to demodulate and decode the signal which violates federal wiretapping laws. Theoretically, these systems could be demodulating all kinds of signals at critical infrastructure locations like nuclear power plants, airports, etc. by using antennas that are listening 50km away. Think about all the critical information about these sites you wouldn’t want to end up in the wrong hands. There is a way to accurately locate a drone without breaking the law!

This August our Drone and Pilot Detection, Location, and Alert System, AirWarden™, was awarded a Developmental Testing and Evaluation Designation by the Department of Homeland Security SAFETY Act. We are extremely proud to be the first, and so far only, drone detection system to be on the SAFETY Act “approved technologies” list. According to the SAFETY ACT website description of AirWarden, “The Technology does not include a capability to defeat or interfere with the flight of UAS, or perform signal analysis functions which would require legal authorization.” If that isn’t proof enough that our system operates within legal requirements, we’re happy to explain further to anyone interested.

We believe in being upfront and honest with our customers and spent a great deal of time early on to create a reliable and legal solution that provides actionable intelligence (locates the drone and pilot). Our passive radio frequency-based product was created in urban New Jersey, has undergone extensive testing in an NFL stadium environment, and is commercially deployed throughout the US. We will remain completely committed to offering a drone detection solution that operates within all pertinent US regulations and plan to be flexible if and when those regulations change.